We’ve been working on a varied set of tasks this last week, with the main additions being vehicles, environment art assets, as well as improved menu/HUD, new AI behaviors and Split Screen Co-op.

One new entity the player will be able to hack are vehicles. In the world of Daedalus most vehicles will be self driven, and as such can be hacked into and commandeered. This will prove to be a useful way of travelling large distances without attracting too much suspicion, or for creating diversions. We may also implement challenge modes that utilize these unconventional ways of using vehicles.

The gif above shows the basic cargo truck, but we aim to add an APC, buggy/4×4 and perhaps some special command vehicles over the course of the next few weeks.

To help flesh out how the environment will look we’ve started to create basic whitebox meshes. These have helped to break up the box rooms we had earlier, although it’s very basic at the moment. Over the next few weeks we’ll have more detailed environments with new materials that should look very shiny. We’ve also swapped out some placeholder assets for slightly less placeholder-y assets, such as the mission collectables. 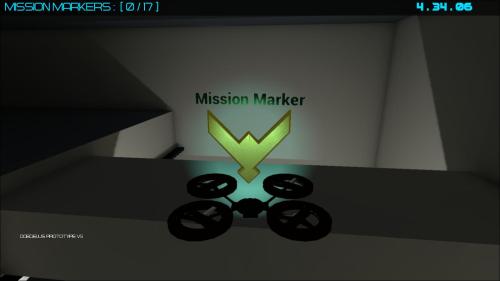 Another area we’ve tried to improve the general presentation of the game is the HUD and menus. This is still all a long way from the finished thing but it serves to help us identify and hone the flow of the menus, as well as what information is lacking in the HUD at the moment.

We will be aiming to add a threat indicator, speedometer and rangefinder/altitude meter to help the player navigate the 3D space efficiently, and also give them a helping hand as to where the may have been spotted from.

We’ve been working on fleshing out the AI, and to this end we’ve set up a basic system for investigating things that are out of place in the environment. For example, if a player knocked over a chair, even if no one has heard it a guard will realise it has moved and become suspicious.

In addition to this we’ve set up special waypoints for searching areas that are off the normal patrol route. This allows a level designer to place waypoints where they believe the player is most likely to hide,  and ensuring the AI does not randomly search a room looking for the player in odd places. It is also now possible to tag an object as “hideable”, meaning that a guard will prioritize that object in their search as it is easy to hide in/on/under.

Whilst we had previously set up a competitive splitscreen mode, we now also have a co-operative splitscreen mode. This is simply a co-op variant of the time trial mode, in which both players work together to collect all the pickups in a level before a timer runs out (while remaining undetected). 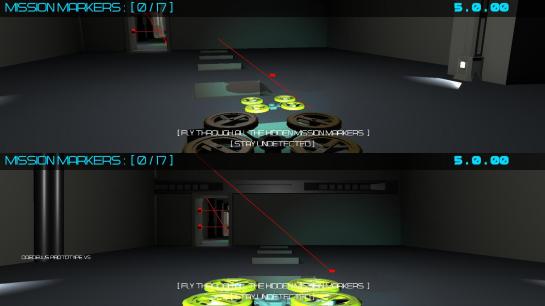 Thanks for checking out the blog, more to follow next week on the 22nd!